Message In A Bottle Marriage Proposal

Jim had an idea for a message in a bottle marriage proposal. He carefully developed a plan and wrote to us for a little extra help.  Jim wrote:

My girlfriend loves pirates so… I plan on having a nautical map of the Outer Banks made (specifically Bear Island as it’s a place known to have hidden Black Beard ) and have navigation notes written randomly on it … However one of the notes will be the proposal. 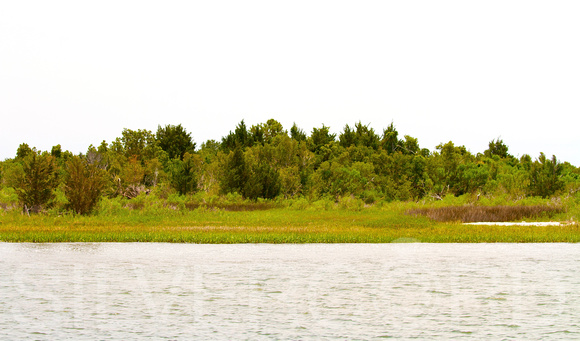 This “map” will be rolled up and put into a leather covered rum bottle (I know not authentic, but awesome). The plan is that we will take a walk on the beach and stumble across this bottle (a photographer friend will have placed it in the sand and be hiding to photograph the moment).

Currently my dilemma is the wording of the proposal…. Any pirate poets wanna take a crack at it?

We love a good poetry challenge and can think of nothing more romantic than a swashbuckling pirate bending down on his one good knee, raising his eye patch and asking his fair maiden to wed!

We were happy to help out and so was Sally Adams Siko from North Carolina based Silvercord Event Photography. 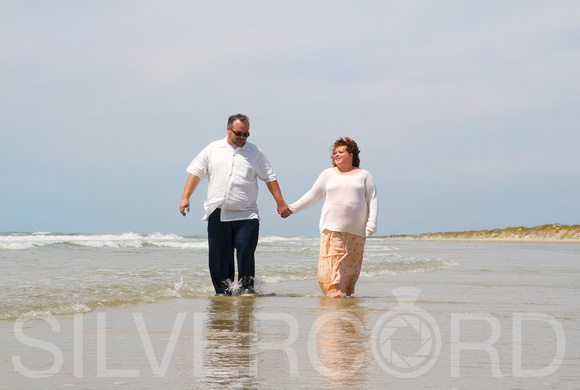 We thought it was very smart of Jim to have a photographer standing by – this is one moment you have to get on cam. We made a few suggestions and wrote (what we think) was a terrific pirate marriage proposal poem. 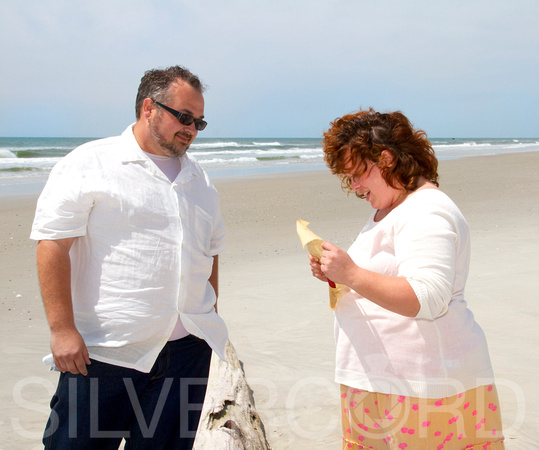 We wrote…. If you love getting into character, you can have a pirate shirt on under your jacket. The long sleeves and ruffled front will be hidden until you’re ready to propose.

As you walk along the beach, towards your rum bottle, it would be fun to bring up an element of a pirate movie she loves. If she loves Pirates of the Caribbean, you might recall some of the highlights, and throw in a couple of ‘Jack Sparrow’-isms.

Look out to the sea and remind her that not very long ago, pirates actually sailed right off this very coast. Don’t worry – you assure her, you will protect her.

This is such an original, fun idea, and so romantic – she is going to be very touched that you took her interests into consideration when you organized your proposal.

We had a few more suggestions….

After you propose, we want the evening to continue. Once your proposal has been caught on film, head back to the car and drive to her favorite restaurant. If you can, pre-arrange a dinner like this:

Go to the restaurant and talk to the manager. Tell him that you want to set up a romantic dinner in advance, and take care of everything now. Most places will really get into this.

Ask for his most romantic table, and if you like it, reserve that for the night of the proposal. (This works best if the night is very soon.)

Plan the menu – start with her favorite beverage, and an appetizer. Choose the entrées, and desserts that you think she will like best.

Give them your credit card or some cash, and tell them not to bring a bill, you will get the receipt later. Organize a 20% tip in advance (that does wonders for service).

During the day and without her knowing, drop a bouquet of her favorite flowers off at the restaurant, to be placed on your table in advance of your reservation.

After your proposal, drive to the restaurant. You park, walk in, and silently the host leads you to a table. She might look at you, quizzically. Your flowers are on the table, she might not notice right away that no other table has such a beautiful bouquet.

Your drinks arrive, without you ordering, as does your appetizer, and everything else. She will soon catch on that you have organized the whole dinner. Her hero!

Ahoy, ye matey – and avast these tidings:
I used to sail the world, singing, “The pirate’s life for me,”
But all alone, I grew weary of sailing the seven seas.

Quickly I tired of searching for a love that is true.
Until that blessed day I cast my eye upon you.
“Shiver me timbers!” I cried from the deck,
You were drifting alone, on that cursed shipwreck.

We pulled alongside, and as you came aboard,
The other mates swarmed, I had to draw my sword.
“Stay back – you scurvy dogs,” I yelled to my men.
And your honor at once I chose to defend.

A fair maiden, at last, whose beauty made me swoon.
Quickly I cashed in my booty – even all my doubloons,
And bought this here bauble to adorn yer soft hand,
And ask that you marry me and move to dry land.

So what be your answer, my lady, my love?
You are my angel, surely sent from above.
Make me the happiest pirate on this earth,
Say yes to me lassie – I pledge forever to prove my worth. 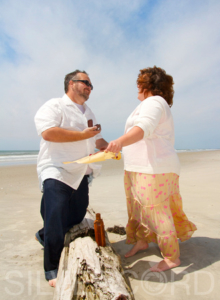 Update from Jim: Post Message in a Bottle Proposal

She said yes!!! I thought I should follow up with a little about the proposal, the preparations were quite stressful but the end result was awesome. I had to skip the dinner option due to the ferry schedule to the island we were staying on but other than that it was great.

Two photographers backed out, one at the last minute after being paid, however the 3rd was amazing. Sally was extremely helpful. I mailed her the bottle with the proposal in it and she did a great job of hiding and documenting the proposal.

Ahhh… the proposal map, yeah that was stressful too. The first person asked to do the project came up with something completely unlike what I was looking for so at the last minute I had to have the map redone.

Everyone thought the poem was amazing, I am really grateful for all the help and suggestions.

We’d like to thank Sarah for being Jim’s inspiration in this whole pirate message in a bottle proposal thing.  Knowing she loved pirates was the seed he needed to create his ultimate pirate proposal plan. He reached out for help with some of the pieces and pulled it off masterfully.

Thanks Sally from Silvercord Event Photography for sharing the photos and video.

Read about other romantic proposals and check out our fun marriage proposal ideas.