The best marriage proposals all have one thing in common.  They’re carefully thought out. They don’t have to cost a lot of money or be incredibly elaborate. But for your proposal to be successful it will cost you a lot of time, because you really, really, really need to think things through. 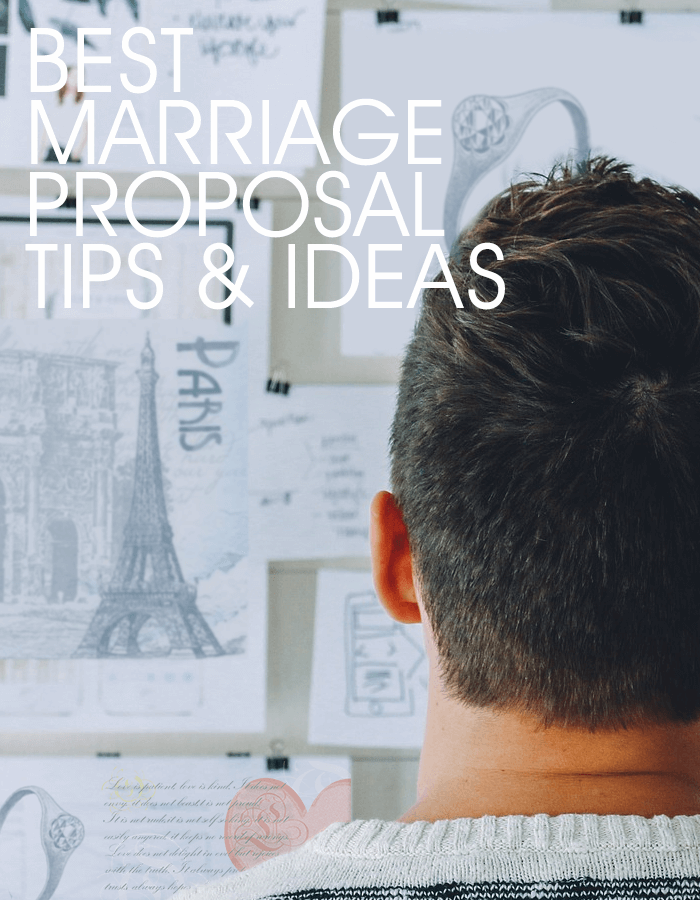 The biggest mistake guys make is to think about what they would like instead of what she would like.

Wedding proposals have been romanticized in movies, novels and legends. As soon as we find out that someone is engaged, one of the first questions is How did he propose?

Maybe we’re nosy, are looking for some inspiration or proposal ideas that we can use ourselves, or maybe we’re hopeless romantics. The point is that a proposal of marriage is one of the few true moments in life that we will be asked about over and over again…. by friends, colleagues, family, our future children and even our grandchildren.

There is nothing more heart-warming than a story where the man gets down on bended knee, gallantly asks a woman to be his wife and a new union is formed. It doesn’t have to be an exciting story or elaborate plan, it can be a simple, sweet, or romantic but whatever it is—it has to fit her and the two of you.

For her the thought, time, and effort that is put into a marriage proposal are the most important elements.

Think about her and the first few phone calls she’ll make to her friends and family right after you pop the question. Try and imagine her talking to them, what would get her excited when she’s relating the story to those closest to her?

There are the obvious clues, like if she’s someone who doesn’t like a lot of attention, proposing in public would be a bad idea, so the Jumbo-Tron at a local sporting event is not the way to go!

There are also subtle clues, watch how she reacts to certain scenes in movies, especially romantic ones. What makes her giggle or tear up? What romantic stories has she told you about her friend’s relationships? What love songs does she think are beautiful? Pay attention, the clues are right there in front of you!

Take the Time to Plan

It’s time for you to start thinking. Relax. Ask yourself some simple questions about her and make a plan.

Begin with just one idea and build on it. Many guys find it easiest to start with where they think they’d like to propose and go from there. Start with that or ask yourself some questions like…

What’s her life’s passion? What does she love to do in her spare time? Does she like surprises? Does she have a fantasy? Would she prefer the proposal in private or public? Use the answers to build out your plan.

Dinner at home is always a great option. It’s personal and private. So prepare a romantic dinner for 2, complete with candlelight and champagne, and think about a really clever way to propose at some point during the night. Make it special—really special, and turn a quiet evening at home into one of the best marriage proposals ever.

There are few simple dates that are more romantic than a picnic in the park. They’re personal, cost almost nothing and romantic. Make sure to go to a secluded area or remote location. You don’t want the Griswald’s having a family get together a few feet away.

Bring along her favorite things, favorite music, a vase with her favorite flower, her favorite game. It’s all about the small details here, make the day all about her and make her feel incredibly special. Then simply propose.

If you’re lucky enough to live by the ocean then plan a day at the beach. If not, you can always plan a mini vacation or weekend away for a little sun and fun. Beaches are very romantic especially in the late afternoon and early evening and a great place to propose.

Any location will work in the end, just make sure that if your thinking about proposing in a different type of setting, it’s one that you both share a passion for, and make sure she really shares it.

If you love baseball, and she hates that you spend so much time watching baseball, your organizing efforts to throw out the first pitch of a game and then drop to one knee and present her with a ring hidden in your baseball glove, might leave you on the pitcher’s mound. Don’t turn this special moment into one of resentment.

One of the easiest ways to come up with an idea of how to play the whole proposal out is to think of it as a movie scene. Where would the scene be set? How would he do it? What would happen after he proposed? Where would they go next?

Now, let’s see how it’s done by building a scenario around the last location we mentioned—a day at the beach.

After spending a day at the beach, ask her to help you build a sandcastle right before sunset. If she doesn’t seem interested, tell her you want to build what your future house might look like, let her know it’s important to you.

While you’re digging in the sand make sure you “find” the engagement ring, or let her find it instead… then get down on one knee and propose.

After she says “yes”, whisk her away to a private table for two at an elegant restaurant overlooking the ocean. Order champagne and celebrate your life together. Have proper attire ready and waiting for the both of you (just like the guy would in the movies) so the momentum of the evening isn’t ruined by having to stop somewhere—just change in the car, on the beach, or the restaurant’s restroom.

Get the idea? Location alone is not be enough, you need to create a story—a few pages in one of those over-the-top romance novels or movies.

Making it special is all about the details. It’s all about the little things she loves and the things she thinks you never notice.  Whatever plan you come up with, make sure you incorporate as many of these types of small details as you can because that’s what will make it truly special for her.

And once you’ve figured it all out, run the plan by someone you trust, better yet, her best friend.

The best marriage proposals come from the heart, they are honest and well thought out. Big or small, expensive and elaborate or modest and simple, be true to yourself, and to her, and have fun with it.

Write your proposal in the sky, hire a band to sing it, tie a ring around the dog’s neck or write it on the windshield of her car—just think of her and the life you’ll soon be sharing.

So enjoy it…. and Congratulations!

We use cookies to ensure that we give you the best experience on our website. By using our website, you agree to our use of cookies.Got it. Thanks!Learn More