Here are a few more sample engagement speeches / toasts specifically from a father or parent. They work for both formal and informal parties and are meant to inspire you for writing your own.  Change the names and some of the details, and you’ll be well on your way to the perfect speech. 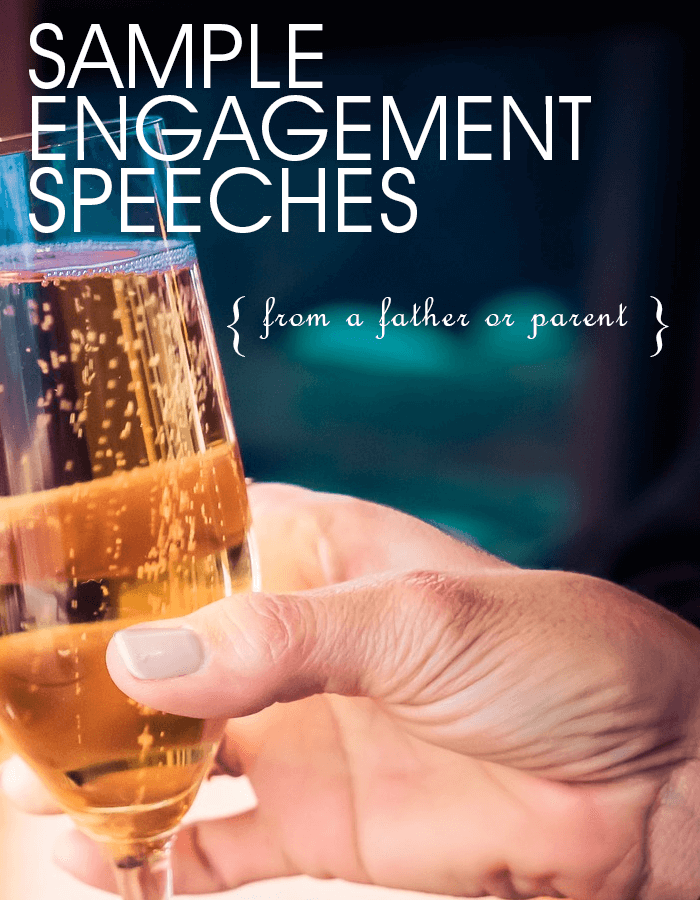 Don’t worry about memorizing every word, it’ll seem more natural if you don’t. But do practice your speech several times in front of a mirror or your spouse, so that when performance time comes you’re very well rehearsed.

Don’t forget to take a deep breath, relax, and have fun. Oh, and don’t drink too much before the speech—a tipsy toaster might mess up!

Most of our sample engagement speeches are written from a father’s point of view because traditionally the father of the bride gives the opening speech at a party. Many of them would be just as appropriate for the mother of the bride or any other ‘parental’ figure.

You’ll note that most of the speeches have a funny line or two—we like to keep the mood light at an engagement party. More serious, religious and solemn speeches can be given at the wedding.

Thank you all for coming to celebrate my daughter’s engagement.

I am sure every father feels uneasy when he sees his little girl grow up and make decisions on her own, but I have a great feeling about this young man, and that makes this a whole lot easier.

I let her hand go when she learned to walk, taught her to ride a bike and drive a car. So you’d think I’d be ready for this next step. But…

Meeting her fiancé helped make it easier—I liked him right away. I respect the fact that he came and asked me for her hand.  Although our meeting was pleasant,  I insisted that he take the whole girl instead.

It’s going to be hard to let her go—but I can’t imagine a better young man than John for Elizabeth to share her life with.

Please raise your glasses and join her mother and me in celebrating this fantastic engagement!

When Beth first brought Peter home, we thought he was a nice, smart young man. In a short time, he has…..proved us wrong.

He’s a Steeler’s fan, and we all know that in this house we root for the Dolphin’s. But we won’t hold that against him. I might next year if we don’t make the playoffs—but for now, it’s all good.

We all are here today to celebrate their engagement. Her mother and I are thrilled.

We hear the modern trend is that the bride’s parents give the engagement party, then the groom’s parents throw the wedding. (pause) Oh, that’s not the case, huh? Well, I guess we have no choice then.

Everyone, here’s to Beth and Peter—I am not only gaining a son-in-law, but also a huge balance on my American Express card!

This isn’t a time for a Rodney Dangerfield performance with a string of one liners. If you want your speech to be funny, give the whole story a humorous twist rather than having a series of punch lines.

Thank you all for coming, we needed witnesses.

When Jeff called me last month and asked for a meeting, I thought he was going to ask for money. I actually did. I didn’t say anything about the meeting to my wife, because knowing her, she would say, “Go ahead, loan him the money.”

When he came in, I was expecting him to have a business plan in his hand, or a spreadsheet at least, but he arrived empty-handed.

We went to my den, and I could tell he was nervous, so I broke the ice and asked him what kind of deal he was proposing. He gave me a strange look, and asked me what I wanted.

Well you called the meeting, don’t you have some sort of proposal for me?”

Not for you, he said, for Jenny.

I was surprised, and told him that I didn’t think Jenny had any money. “I’m not marrying her for money,” he said, surprised. I quickly replied, “Marry her? You’re not here to ask me for money for a deal?”

You want me to pay you to marry Jenny?Jeff asked.

I told him to calm down, and take a minute. Was he there to ask me for Jenny’s hand? YES, he said.

What a relief. A daughter I had, money, not so much.

Welcome to the family Jeff!

Toast Version of A Prepared Speech

We’ve taken one of our sample engagement speeches (the one right above) and turned it into a quick toast. If you aren’t sure what’s needed at a party, it’s better to prepare a short speech and turn it into a toast, if that seems more appropriate when the time comes.

When Jeff called me last month to ask for a meeting, I assumed he wanted to borrow money. When he asked for Jenny’s hand instead, I was quite relieved—a daughter I had, extra money I didn’t.

So here’s to the happy couple—welcome to the family, Jeff. And if you do plan on asking for a loan, I think you know the answer.

Finally, no list of sample engagement speeches would be complete without a sentimental toast from a surviving parent. Although this is written for a widowed wife/mother, it would work just as well coming from a father. In both cases it can be tailored to a son instead of a daughter.

I look around the room at all of the familiar faces, some new, and my glance stops on the couple. I see how excited they are, and knowing how excited I am, I can imagine how they feel.

Rebecca, your father would love to see this, and I know how proud he would be of you two. He is most definitely here in spirit, and I can speak for us both in giving you our blessing.

Please raise your glass to my lovely daughter, and her soon-to-be husband. May your life together be as happy as mine was with your father.

We hope that these sample engagement speeches have inspired you.

As you can see, there are really no right and wrong ways to do it. We guarantee that if you stick to what you know and what’s in your heart, you’ll be a smashing success. 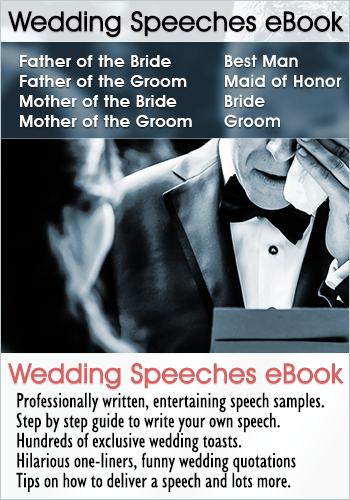