Engagement announcement etiquette is steeped in tradition. It begins with personal announcements made to close family (parents, siblings, grandparents) and friends, and ends with some form of public announcement. 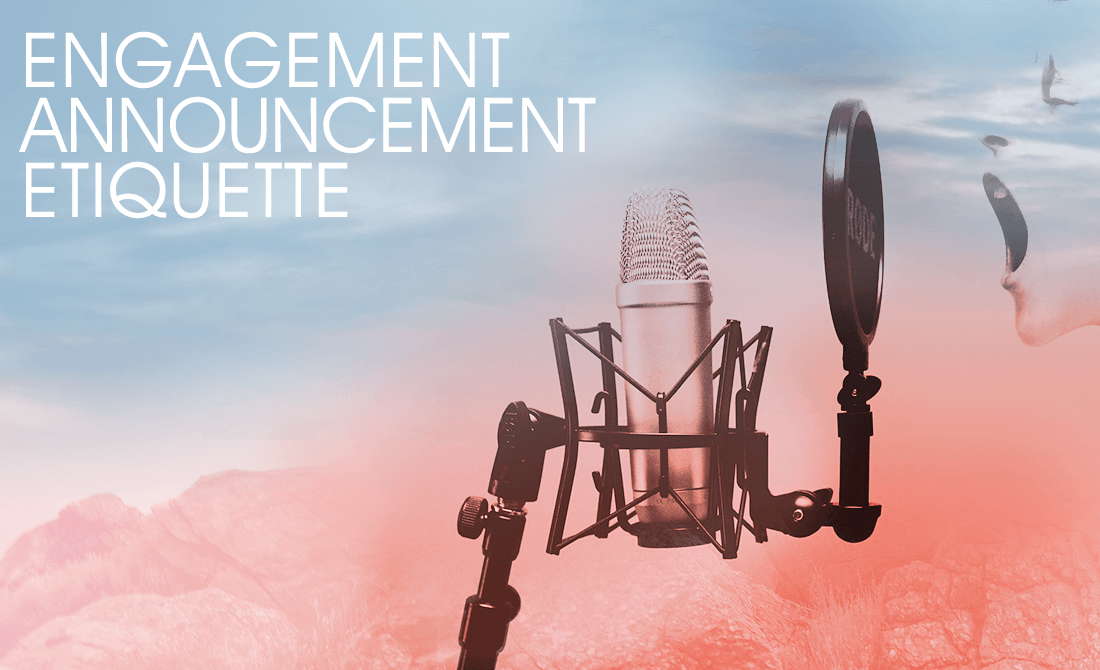 If you want to strictly follow the rules, the soon-to-be bride’s parents are told first. It’s a tradition that comes from the need to get the bride’s dowry together and pay for the wedding—boy, have times changed!

Immediately after her parents, his parents are told. Then, close family and friends. Today, things are much less strict but if you want to stick to proper tradition & protocol for announcing your engagement this is the way it’s done.

Once these personal announcements are out of the way, you have many options for the public one.

An engagement announcement in a newspaper is the most conventional way to make your new commitment public.

Traditionally, the bride-to-be contacts the local newspaper to get all the specs and info needed. Then,  she and her parents craft the messaging. If the groom’s family doesn’t live in the same area, another newspaper announcement needs to be made for his side of the family.

This is again handled by the bride’s family since engagement announcement etiquette dictates that it needs to come from her side.

Traditionally, the parents of the bride would host a party with their closest friends. They’d raise their glass at one point in the evening, and announce their daughter’s engagement. This was never really considered an engagement party since the guests were unaware of the occasion prior to coming.

Today, you can have a simple gathering of close friends and family in your own home, and make a surprise announcement of your engagement. You’re still fine etiquette-wise because you aren’t actually hosting a party to celebrate yourself since the guests were unaware.

In all cases, whether it’s a surprise announcement at a gathering or not, traditional engagement etiquette stipulates that the public announcement be made right after the party (preferably the next day).

The reasoning is that your party guests (who are your closest friends and family) should know of your engagement and celebrate it prior to the general public.

If parties aren’t your thing or not within your budget, traditional engagement announcement etiquette also allows you to mail (yes… envelope, stamp and all!) formal announcements. More often than not,  it takes the form of a card that is professionally printed, or even homemade.

Like the parties, it means that everyone who gets an announcement must also get a wedding invitation.

The announcement itself should be written by someone other than the bride or groom, preferably her parents. They typically include the couple’s names,  parent’s names, and can include work or education credentials and the approximate date of the wedding. Since it’s not likely a date’s been set, something like “a summer wedding is planned” is fine.

ENGAGING TIP: Proper engagement announcement etiquette recommends that all those who are closest to you should hear about your engagement from you, so don’t delay announcing the good news.

Engagement announcement etiquette is steeped in tradition and comes from a time when Facebook meant a book about faces and tweets were what birds did.

Today things are different and you have many options for announcing your engagement from formal announcements to sending out fun and stylish engagement announcement cards.

You can post a newspaper announcement or tweet your news. Regardless of what you do or which way you go, the content of your announcement should be pretty much the same.

Check out our samples of engagement announcements if you need a little help with what to say.

Finally, someone wrote in to ask us how to announce an elopement. We found some great examples of eloped wedding announcement wording and we’re happy to share.

Even though you can tweet, share, and ‘like’ today, this is a special time in your life and a little tradition to commemorate your engagement (like a card or formal announcement) is a good thing.

It creates a keepsake of this happy time in your life and is something that can be shared with future generations.

As we say throughout this site, YOUR engagement is all about you! If you want to go the formal and traditional route, go for it. And if you want to announce you’re getting married at a luau in the arctic, do that too. Remember, this is your engagement so understand the rules but in the end, do what feels right for you.

Oh, and by the way… Congratulations!